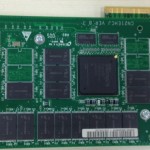 The result was SDF, or “Software-Defined Flash”, a card that END_OF_DOCUMENT_TOKEN_TO_BE_REPLACED 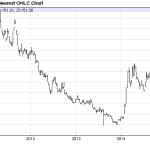 A friend who trades in commodities has been having a difficult time lately.  He placed a sizeable bet on coffee futures back in 2011, only to see prices slide from a $314 peak to today’s $151 prices.

So why would this appear in the pages of The SSD Guy blog?

In a nutshell, coffee demand is falling thanks to increased use of SSDs.  It’s not that people were giving their computers coffee to speed them up, nor were managers ladling coffee into their employees to get more out of them when the real problem was slow PC performance.  Instead it’s about boot-up time.

For the past few decades the average worker comes into the office, turns on the PC, then goes to the coffee room to get the morning’s first cup of brew while the PC slowly finds its way to full operation.  While in the coffee room that worker may encounter workmates, and delve into a heady conversation about last night’s TV programs, or a sporting event, or even politics.  This might turn that one-cup coffee-room visit into a 2-cup session.

Now that savvy bosses are END_OF_DOCUMENT_TOKEN_TO_BE_REPLACED