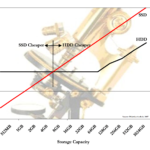 A recent Storage Newsletter article argues that SSD prices are approaching HDD prices, and that the gap has narrowed to only a 2.7 times difference.

Upon closer inspection, though, the reader will note that this is only true at lower capacities.  The narrowing price gap at lower capacities has always existed in this market.  The SSD Guy was making that  argument back in 2007!

This post’s graphic shows a chart from the first report ever published by Objective Analysis over a decade ago: The Solid State Disk Market – A Rigorous Look.

The point of this chart was to illustrate that, at low capacities, SSDs are cheaper, while at higher capacities HDDs provide lower-priced storage.

The concept is simple: It’s uneconomical for an END_OF_DOCUMENT_TOKEN_TO_BE_REPLACED 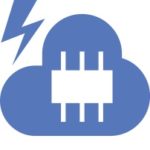 There’ a catch to this approach, since the DAS SSD must be END_OF_DOCUMENT_TOKEN_TO_BE_REPLACED