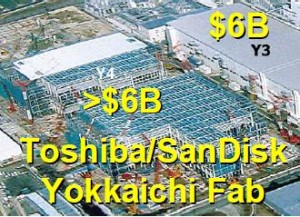 Money has a way of coming out of the woodwork when there’s a clear return.  When the photovoltaics industry underwent a polysilicon shortage in 2007-8 $50-100 billion popped up to overbuild polysilicon production, resulting in today’s glut and FTC charges of dumping.

Although $700 billion is not going to be invested in a $25 billion market organically, there is no reason to rule out a $700 billion investment from sources external to the market, provided there is a clear path to profits from that investment.

The real argument is that there has not been such an investment because there is no reason to expect consumers to change their behavior.  Today these consumers select a PC based, in part, on price and HDD capacity, and this rules out their choosing an SSD.  This is the real reason that HDD makers need not fear that their business will be snatched away from them by NAND flash makers.

Objective Analysis regularly compiles reports covering the SSD market, and the forecasts in these reports are based on a clear understanding of the market gained through rigorous end-user surveys.  This has resulted in forecasts that have consistently been the most accurate in the business.  These reports can be ordered for immediate download from the Objective Analysis website.