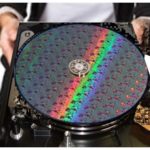 The NAND flash on the wafer is almost completely standard.  The only two changes are that the chips aren’t scribed or sawn apart, saving a small sum, but a hole must be etched through the center (which can be seen in the photo below) offsetting this savings.  The HDD mechanisms are unchanged with one exception: While today’s HDDs are largely manufactured using 2.5″ and 3.5″ platters (65mm & 90mm), NAND flash is exclusively produced on 300mm wafers.  This means that the entire HDD mechanism must be scaled up to a larger size than normal.  This is clear from this post’s first graphic, which can be viewed in a larger size at the bottom.

One government researcher (who must remain nameless, due to the sensitive nature of the project) explained that it was relatively simple to move to this larger disk size since HDDs until the middle-1980s were most commonly produced in larger formats like 12″ and 15″.  “We just had to go back to the older disk diameters,” said Dr. Manamana Zilch, “which means that the mechanical design was already done for us some 30-plus years ago.  It’s already paid for!”  The actuator, motor, etc. are identical to those in a hard disk drive.

Of course, certain updates will be included in the new product to take advantage of the past three decades of HDD research and development.  For example,many modern HDDs have switched the gas within the drive from air to helium to reduce turbulence, supporting higher track density.  Silicon has its own preferences, though, so the researchers plan to build these devices using a silane atmosphere.  Although silane combusts when exposed to air, the researchers say that fires are only likely if the device is bumped or jostled, for example when an airliner encounters turbulence.  The unfortunate result would be an aircraft fire mid-flight.  Even trucks might encounter potholes, so they recommend for the SiliDisk to be transported via railways or pack mules.  Researchers casually explain that this is a worthwhile trade-off.

In the end this invention provides the best of both worlds: HDD speed at the cost of an SSD.  With these two features working to its advantage there is every reason to anticipate that this technology will completely replace all SSDs and HDDs in the marketplace within a very short period.  In fact, the SSD Guy is working to publish a report in the very near future that includes a very bullish SiliDisk forecast.

The researchers have an aggressive rollout planned for the SiliDisk, and have scheduled significant production volume by April first, 2020.  The SSD Guy wishes them every success in this effort.

5 thoughts on “HDD & SSD Combined Into One”