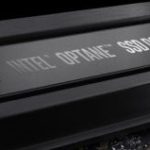 Recently NAND flash SSDs have helped Intel to improve the platform’s speed, as did the earlier migration of DRAM from Fast Page Mode, to EDO, to SDRAM, to DDR, then DDR2, DDR3, and DDR4, all orchestrated by Intel.  Today, Optane is yet another step in this drumbeat of new platform technologies to support Intel’s growing processor performance.

Intel has committed to ship Optane SSDs based on 3D XPoint technology by the end of this year.

When The SSD Guy attended the July 2015 3D XPoint launch Intel & Micron claimed that the technology would be 1,000 times as fast as NAND flash at a chip density (which inversely translates to cost) that was ten times that of DRAM.  This second parameter was an indication (but not at all a promise) that 3D XPoint might be able to be manufactured for about 1/10th the price per gigabyte of DRAM, putting it nearly on a par with NAND flash, which today sells for 1/15th DRAM’s price.

From a performance standpoint, Intel did itself no favors by placing this very fast technology behind a PCIe/NVMe interface.  As I explained in some technical depth in a June 2016 SSD Guy post, this interface would limit even an infinitely fast memory technology’s speed to about 5-10 times that of NAND flash behind the same interface.  NVMe is a very fast interface for flash memory, but it does a great disservice to something as fast as 3D XPoint memory which is why DRAM-based PCIe SSDs are unpopular.  Hardware designers knew how to make a DRAM SSD, and a few did make them, but the performance was bad enough that few system administrators found them worth purchasing.

The argument in favor of a DIMM interface instead of a PCIe/NVMe interface is explained in some depth in the Objective Analysis report: A Close Look at the Micron/Intel 3D XPoint Memory.  We believe that 3D XPoint will really catch on once it is put onto the memory channel, which Intel has committed to do at some future point.  The memory channel doesn’t bog down XPoint’s speed with unnecessary I/O protocols.  Our expectations for the success of 3D XPoint on the PCIe/NVMe bus are much less optimistic.

This price will make adoption of the Optane SSD less compelling to most users than it would be if the pricing was nearer to that of a NAND flash SSD.

There are two good reasons for this very high price point.  First, 3D XPoint technology is in its infancy, so there’s not much of it to go around.  Although Intel’s recent press release states that the Optane SSD is available to customers in an early ship program, the last concrete data point that we had was the fact that Intel was only able to come up with two Optane SSDs at last August’s IDF, one full year after they presented the first such device.  This implies that there has been quite some difficulty in producing the tiny handful of chips required for each SSD.

The second is that the economies of scale are working very much against Intel, a situation that we estimate will continue for at least two years after first shipments.  We learned with NAND flash that hundreds of millions of chips must be produced in order for a memory that is denser than DRAM to beat DRAM’s cost per gigabyte.

The same will hold true of 3D XPoint memory but since products will only attract buyers if they are priced lower than DRAM, Intel will need to cultivate the market by selling the technology at a loss until volumes reach levels approaching 100 million units.  Given that this is a new technology based on non-silicon materials that are not understood as well as the silicon used for all other chips, Intel’s  learning curve for 3D XPoint will undoubtedly be significantly more challenging than it is for more standard chips.

As a matter of comparison, 3D NAND couples well-understood materials with new and challenging processes – and it’s three years late to market.  Intel’s 3D XPoint technology teams a new material that hasn’t yet been put into a high-volume production with new and challenging processes.  This doubles the difficulty of bringing 3D XPoint costs in line with the cost of DRAM.

Intel is in business for profit.  How can such losses make any sense?  In fact, how will Intel’s investors abide by these losses?

This is a key part of Intel’s strategy.  For argument’s sake let’s assume that Intel loses $10 per system on its 3D XPoint-based Optane products, but that the Optane SSD or Optane DIMM allows a user to realize the benefit of a much more powerful processor that sells for $50 more than the processor the customer would have otherwise used.  Intel will then pocket the $40 difference, something that the company could not have done without Optane’s help.

For the company’s sake, let’s hope this strategy works.  Should Intel lose money on its 3D XPoint memory’s sales that it doesn’t recoup with increased processor revenues you can expect to see executive departures.  On the other hand, if 3D XPoint memory succeeds and improves Intel’s overall margins then these same executives will be bathed in glory.

It will take a couple of years to see how this strategy turns out.  Objective Analysis will be watching Intel carefully, and we will share our observations with our clients as they play out.

2 thoughts on “Intel Announces Optane SSDs for the Enterprise”