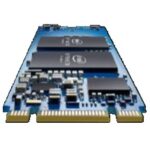 On Friday, January 15, Intel announced the discontinuation of certain of the company’s Optane SSDs for consumers PCs.  Naturally this is making Optane users curious about the future of the entire product line.  Is this a big move?

In a word: “No.”  It’s a relatively small part of overall Optane shipments, and it is probably the least profitable part of the overall Optane business.

First, let’s look at why Intel is making Optane SSDs in the first place.  Those with good memories may recall that I wrote a blog post way back in 2016 called Why 3D XPoint SSDs Will Be Slow.  This was even before Intel announced the Optane name.  The crux of that post is that an SSD isn’t a good place to put 3D XPoint memory because the SSD interface bogs down XPoint’s 1,000-times speed benefit enough that it is nearly all lost.  Optane SSDs, which cost about half as much as DRAM, or 5-10 times as much as a NAND flash SSD don’t provide consumers a big enough performance advantage to warrant the additional cost.

But Intel’s strategy was not focused on the SSD.  The company’s goal is to couple Optane DIMMS (formally: The Optane DC Persistent Memory) to its server processor sales to provide an important cost/performance advantage over its rivals.  The DIMM format uses a very high speed DDR4 bus, and this allows XPoint’s true potential to be realized.  I explained the benefit of Optane DIMMs in great depth  in my most recent 3D XPoint report.

To make Optane viable in the  server market it must be priced below DRAM, and production costs can only be made sufficiently low if the “Optane Media” (3D XPoint memory) can be produced in high volumes.  Intel wanted to create demand for 3D XPoint to drive its cost down, and SSDs appeared to be an easy way to do that.  In the meantime the company had to suffer losses on this product line.   This seems to be working to some extent.  See the post on The Memory Guy: Did 3D XPoint Costs Reach Break-Even?

But given that Intel’s whole reason to make Optane SSDs is to boost factory volume, then the net benefit to Intel will be increased by growth in chip volumes and reduced by any support requirements.

The SSDs that Intel is phasing out require a lot of support.  Since they are aimed at the broad consumer market – they must go through rigorous tests to assure backwards compatibility with older CPUs and systems.  They are also being sold to consumers, rather than OEMs, and the higher level of interaction with consumers increases the company’s support costs.

Meanwhile, these SSDs appear to be selling in relatively low volumes.  These low volumes, and the SSDs’ low capacities, as low as 16GB, have a multiplicative effect: Not many chips are driven by this particular market.  The company would do better to sell one tenth as many SSDs to the data center, each with more than ten times the capacity, than it would to continue to sell smaller capacity SSDs direct to the consumer.

This move isn’t that surprising.  Only a month ago Intel announced a number of new NAND flash and Optane SSDs, many of which were a follow-on generation of existing first-generation Optane products.  During this roll-out Intel did not announce any upgrades to the products that are now discontinued.  Consumer focus was shifted to the H10 and H20, which are hybrid Optane/NAND SSDs.

In the end Intel isn’t importantly reducing its chip shipment volume, and it is grooming itself to have fewer Optane losses by taking this step.

7 thoughts on “Intel Discontinues Optane Consumer SSDs. Is This Important?”