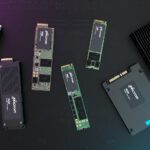 Micron announced last week (6 Oct., ’21) a family of datacenter SSDs, the NVMe 7400 series, in a roll-out that includes more product versions than The SSD Guy ever has seen in a single announcement.

Micron calls this product series: “the broadest selection of mainstream data center SSDs available.”  It would certainly seem so!  I found the details in the press release somewhat confusing, so I boiled it down to a pretty typical table (below) of form factors vs. capacities.  Since the SSD is offered in two endurance levels: Max (3 DWPD) and Pro (1 DWPD), I used those two words in the table to denote which models are currently available.

You may have noticed that all of the Pro versions, those with 1 DWPD, have capacities 20% larger than their Max counterparts, which can withstand 3 DWPD.  This indicates that 20% of the Max SSD’s capacity is used for additional overprovisioning to increase endurance.

Both the U.3 and E1.S versions are offered in multiple thicknesses, as depicted in the table above, to support either high packing density (thin) or enhanced cooling (thick).  (For those unfamiliar with the E1.S nomenclature, it’s the Enterprise and Datacenter SSD Form Factor, formerly known as EDSFF.)

This SSD series is based on the PCIe Gen4 interface, making it fast, delivering nearly one million read IOPS while consuming only 6 Watts of power.  The company tells us that the new SSD provides over double the throughput and IOPS per Watt of Micron’s previous SSDs.

For security the 7400 series supports TCG-Opal 2.01, IEEE-1667, and new features to protect data-in-flight and data-at-rest.  Protection can be extended through the use of the SSD’s Secure Execution Environment (SEE) which Micron developed to isolate and process security transactions.  This technology, based on dedicated memory, secure code, and a security microprocessor, is designed to extend protection against current and future threat models.

The 7400 supports 128 namespaces, which is a change from Micron’s prior SSD generations.  The explanation is that block-based SSDs offer faster random writes than ZNS SSDs, and are less complex to design, but ZNS provides better endurance.  For the 7400 series ZNS helps the SSD reach the 1-3 DWPD specification by managing write traffic better.  This is an important part of how Micron can offer the 7400 series with a 5-year warranty, rather than the more typical 3 years.

Micron boasts that all the key components are internally sourced: NAND flash, controller, firmware, and DRAM.

All in all, the 7400 has impressive performance.  Given all the form factors that have been unleashed at the same time, it’s overwhelming!

One thought on “Micron’s Big Product Launch: The 7400 Series”