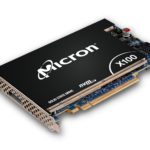 While the company didn’t disclose too much about the device, it did brag about its speed, claiming that the X100 is the world’s fastest SSD, running three times faster than the fastest NAND flash SSDs and almost three times the speed of other XPoint SSDs.  The product is said to provide a very impressive 2.5 million IOPS for 4kB random reads at a queue depth of 1 and to support a 9GB/second bandwidth in read, write, and mixed traffic.  (NAND flash SSDs perform much better at reads than at writes due to the underlying NAND chips’ extraordinarily lopsided read and write specifications, among other quirks.)

Just as Intel has done, Micron plans to introduce storage products first, before bringing out a memory module to fit into a DIMM slot.

How did Micron achieve this impressive level of performance?  Well, in addition to the very low latency of 3D XPoint memory, the company implemented this SSD using a whopping 16 lanes of PCIe 3.0, four times that of most high-performance NVMe SSDs.   SSD companies often explain that bandwidth can be improved by adding lanes (which Micron has certainly done here) but that latency is restricted by physics.  In the case of the X100 the move from NAND flash to 3D XPoint memory accounts for most of the physics, but the  controller appears to help too.  While Intel’s Optane SSDs, which also use 3D XPoint memory, have a minimum latency of 10 microseconds, the X100’s latency is 8µs or lower, and since the 3D XPoint chips for both products are the same, that implies that Micron’s controller is pretty fast.  Micron boasts that the X100’s latency is one eleventh or less of the latency of a NAND flash-based SSD.

There’s probably some room for improvement in the bandwidth, though.  One observer pointed out to The SSD Guy that Samsung’s 970 Pro SSD which uses four PCIe 3.0 lanes has a read bandwidth  of 3.5GB/s, harnessing 90% of that configuration’s peak bandwidth, while the Micron X100’s read bandwidth is only 9GB/s, or only 58% of the peak bandwidth available using sixteen PCIe 3.0 channels.  This argument implies that some future Micron 3D XPoint SSD may be able to support a read bandwidth of 4 x 3.5 = 14GB/s.  Of course, today’s PCIe 4.0 advocates point to the fact that the bandwidth could be doubled by migrating from PCIe 3.0 to 4.0.  I am sure that will happen at some point.

I have heard hints that the X100 is based upon a similar architecture to certain early PCIe SSDs that tied a number of SSDs to the PCIe bus via a host bus adapter (HBA) card or a RAID controller.  While such an architecture may not provide the ultimate performance, this has always been a quick way to implement the hardware side of a PCIe-based SSD.

What Took So Long?

Ever since Intel and Micron introduced 3D XPoint memory back in 2015 Micron has been promising to deliver SSDs and DIMMs based upon the technology, yet it wasn’t until 2019 that the company actually introduced a product.  What took so long?

Micron’s not giving any answers, but I can think of a couple.  The first is that 3D XPoint probably proved harder to put into production than anybody expected.  That’s not uncommon for a new technology.  The second is that 3D XPoint is losing money.

So 3D XPoint can fill its spot in the memory/storage hierarchy only if it is faster than NAND and can be sold for cheaper than DRAM.

The speed of a 3D XPoint memory chip is well understood, thanks to our old friend Physics.  What has caused difficulty is its manufacturing cost: The chip has been unprofitable since introduction.  It has to sell for less than DRAM, but it costs significantly more than DRAM to produce.

This is not a big issue for Intel, since the company is paving a path for its higher-performance processors to follow.  Let’s say that Intel loses a certain sum for every system that uses 3D XPoint or “Optane” memory, but let’s also postulate that Optane allows the same system to use a higher-speed CPU that more than offsets the Optane loss.  That makes good business sense, as long as you’re Intel.  But when Micron loses money it doesn’t have an offsetting CPU sale to balance it out. 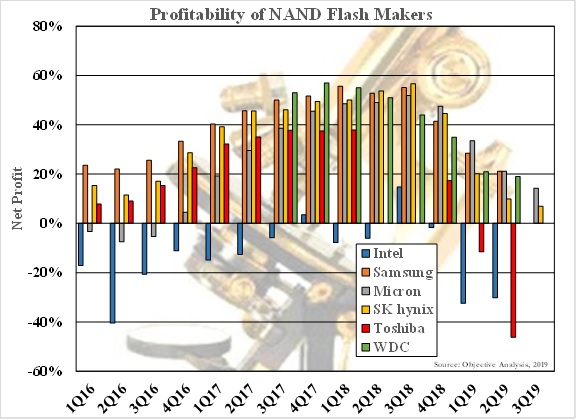 This graph shows net margin for all the leading NAND flash suppliers.  The Intel bars (blue) show Intel’s Non-Volatile Solutions Group (NSG) which makes all of its revenues from Intel NAND flash, Optane, and SSDs.  Note that in 2018, when all other flash makers were enjoying pretty hefty margins, NSG only reported a profit in the third quarter.  My suspicion is that Intel’s NAND products were just as profitable as the company’s competition, but the Optane products consumed all of that profit and more, causing the group to lose money.

Until recently I have told my clients that Micron would not make 3D XPoint SSDs until NSG became profitable.  Well, NSG’s not yet profitable, but the Micron X100 is being introduced anyway.  Why is that?

For the past year Micron has been writing off $100 million per quarter on expenses stemming from the 3D XPoint production that the company has not been selling.  All of the world’s 3D XPoint memory is produced at a Micron wafer fab in Lehi, Utah in the US.  Prior to mid-2018 Intel was taking the entire output of this facility (which was supposed to be split 50/50), but it seems that Intel hasn’t been selling enough Optane SSDs to continue this level of purchase and Intel’s Optane DIMMs (formally named “Optane DC Persistent Memory”, but commonly referred to as DC-PMM) are only just starting to become available.  So, rather than taking its half and purchasing Micron’s half of the Lehi plant’s output, Intel is taking its half and letting Micron worry about the other half.  This has forced Micron to write off $100 million of production for each of the past four quarters, a number that the company estimates will increase to $150 million in the current quarter.

From this it appears that Micron can no longer wait for 3D XPoint products to become profitable, but is now simply trying to reduce the losses that result from the company’s participation in the 3D XPoint JV with Intel.

The new product has stellar specifications, so even if the Optane SSD market hasn’t lived up to Intel’ expectations, Micron stands a good chance of taking 3D XPoint SSD sales away from Intel provided the X100 is priced aggressively.

Readers who would like to understand 3D XPoint in greater depth are welcome to have a look at our 3D XPoint report that can be purchased for immediate download on the Objective Analysis website.  We are optimistic about this technology, and expect for it to do very well over the long term (especially in DIMM format) but both Micron and Intel will suffer losses getting to that point.