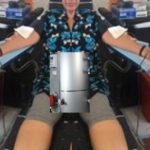 According to confidential information disclosed to The SSD Guy, the US military has made several advancements in a novel approach to provide soldiers, sailors, and aviators with portable storage that cannot be lost or stolen.

Consider the difficulty faced by the armed forces: Confidential information is now a part of every enlisted person’s mission, yet that data, if stored on an external HDD, USB flash drive, or flash card, could fall into the hands of an adversary.  How can the military prevent this from happening?

The solution is ingeniously simple.  Iron in any form can be magnetized, and magnetization is the most common of all ways to store data bits: It’s used in tape and hard drives, which, combined, account for more than 90% of all data storage today.

The human body has plenty of iron, traveling though its veins in the blood stream.

The military’s approach is to magnetize the blood’s iron to represent the bits of important data.  The entire person would need to be lost or stolen for an enemy to come into possession of the data.  With such an approach the likelihood of a data breach becomes vanishingly small.

An added benefit is that the data storage mechanism weighs absolutely nothing.  Military personnel need not carry anything yet they will still possess the data.  This means that, even if they lose all of their clothing and armaments, the data will remain intact.

To read or write the data personnel need simply to be connected to the reader, shown in this post’s picture.  A needle is inserted into one arm for outgoing blood, and the returning blood is inserted through another needle into the other arm.  No blood is lost in either a read or write operation.  This  represents the  ultimate  in convenience.

In fact, the body’s own blood flow ensures that no mechanical systems need to be used to read the data.  As the blood flows across the head it  naturally generates electrical impulses that can be read as data bits.

This extraordinarily clever device has been given the name: “Blood Drive.”

Former Seagate Chief Technologist Wayne Rickard confirmed that the storage giant had explored commercial applications based on the same principles but abandoned them when market research showed consumers were reluctant to self-insert the intravenous catheter required to intercept the normal circulation of blood.  The military, though, appears to have gotten past such qualms.

In related research at an undisclosed tech company, an insider going by the unlikely pseudonym of “Bret Savage” suggested that the concept of polarizing human blood to encode data continued to gain support as a mechanism for encoding and transferring actual memories from an organic human brain to a digital representation in “the cloud.”  Still to be solved is the problem of “brain drain” whereby the transferred memories in the human host are replaced with continuous-loop theme songs from 1970’s era sitcoms and images from MTV Madonna videos.

It’s a wonderful invention, and I hope that I haven’t completely ruined the military’s secret by providing all readers of The SSD Guy with this information.  Perhaps they will forgive me since it’s April Fool’s Day.