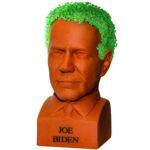 PNY sent The SSD Guy an interesting press release about a new SSD designed for use in Chia plotting operations.

For those unfamiliar with Chia, it’s not the silly Chia Pets (like the Joe Biden Bust in this post’s graphic) that use vegetation to replicate hair, but is instead a new cryptocurrency somewhat similar to Bitcoin.  We are told that Chia uses “Proof of Space and Time” models for mining rather than the “Proof of Work” models that Bitcoin employs.  While that means that Bitcoin’s approach is compute intensive, Chia’s takes advantage of unused space on HDDs.

But that “Unused Space” might be larger than what Chia Miners already had available on their existing drives on their PCs.  In fact, the requirements are great enough that there was said to be an HDD shortage in China a couple of months ago, where folks were actively embracing the opportunity to do Chia Mining.

PNY tells us that Chia Mining is done by “Plotting” and that this presents a lot of write activity to the drive, so PNY has released three high write endurance SSDs (details HERE) aimed specifically at accelerating the Chia Mining process.  The company gave us impressive TBW statistics, which, when paired with its 2-year warranty, gives us the following DWPD numbers (calculated the way I showed in an earlier post):

The DWPD numbers are unusually high, in part, because of the 2-year warranty period.  With a 5-year warranty these numbers would shrink to 15 and 3 DWPD.  But Chia miners are likely to be satisfied with a 2-year warranty, so that seems fair.

How high does endurance go?  Way back in 2012 SMART Storage Systems devoted itself to producing the absolute highest endurance SSDs in the market.  While competitors struggled to get to 20 or 25 DWPD, SMART got to 50 DWPD with a 5-year warranty. (SMART Storage Systems was later acquired by SanDisk which was subsequently acquired by WDC.)  This was at a time when sysadmins didn’t understand their workloads, and would pay more for high-endurance SSDs as a form of insurance against the unknown.  A few years later workloads became better understood, and better managed, and the popularity of such SSDs waned.  Today, many enterprise systems are confidently built using SSDs with endurance levels of 1 DWPD or less.

But even SMART’s 50DWPD figure isn’t the highest.  Nimbus Data has a 100TB SSD (yes, 100!) that cannot be worn out, simply because it’s too darn big to access the entire SSD fast enough to wear it out!

Taking that perspective, I thought it might be interesting to see how long PNY’s high-TBW SSDs would last under a constant deluge of writes at their maximum write bandwidth.  This assumes that there’s no write throttling, which is commonly applied when the SSD gets too hot.  (Flash writes create a lot of heat.)

These drives are certainly very robust for client use, and PNY is taking advantage of that, and of today’s fascination with Chia by labeling these SSDs as Chia-specific models.  I will be checking back with them later to see how that marketing approached worked for them. 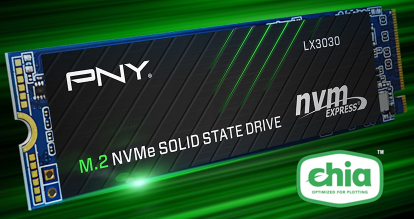 Objective Analysis specializes in looking deeper into products and strategies.  To gain a real understanding of your market please contact us to explore ways that we can work together for your company’s benefit.