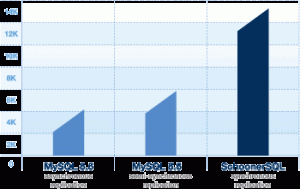 SanDisk today announced the acquisition of Schooner Information Technology, a developer of SSD-optimized software.  Terms were not announced.

Schooner has had an interesting and difficult history.  The company started out as a manufacturer of appliances based on standard computer hardware, one that ran MySQL, and the other was a memcached appliance.  Both used standard server boards complemented by an array of SSD storage, and both were lightening fast.

The trouble is, these were dedicated servers being introduced at a time when the world was fast embracing the notion of building a virtualized data center from undifferentiated hardware.  Schooner changed its business model to one of supplying SSD-optimized software and found itself ahead of the curve – the world has not yet caught up to the notion of buying software that runs very well on SSDs and is not even slightly optimized for use on HDDs.  SanDisk’s significant resources will now to support this effort until customers catch up to the idea that this is the only way to harness all the power flash has to offer.

This is the third important SanDisk announcement of an investment in products aimed at the enterprise:  SanDisk acquired enterprise SSD maker Pliant in May 2011 and cache software maker FlashSoft in February.  It is clear that this consumer products company plans to use enterprise storage to fuel its next wave of growth.