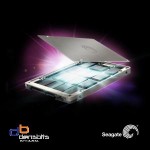 Seagate today announced an investment and technology agreement with DensBits, an Israeli SSD controller company mentioned by The SSD Guy in another post.

A pattern is starting to emerge.  We understand that Seagate’s current Pulsar SSDs use chips from Link_A_Media (the subject of another recent post) which has only recently disclosed its existence.  It seems that the leading HDD company is unafraid to seek start-ups with brilliant new technology to give itself an advanced technology position in the SSD market.

Work with early-stage start-ups may well be an important part of Seagate’s established corporate culture.  SanDisk, in its early years, co-authored a number of SSD patents with Seagate over 20 years ago.

This should be a good partnership.  Seagate has the financial resources to significantly boost a start-up’s performance, and DensBits has a technology that should help Seagate take advantage of some pretty unruly chips.  TLC at sub-20nm processes will have very difficult error rates and endurance, and this is the area in which DensBits says it shines.

One thought on “Seagate Invests in DensBits”