While many of us, The SSD Guy included, were preparing for our New Year’s celebration, SK hynix, on December 30, closed the first phase of the company’s takeover of Intel’s NAND flash and SSD business, and created a new subsidiary that has been named Solidigm.

This is the first of two phases of the acquisition, which the companies agreed to in October 2020.  With this move, SK hynix has acquired Intel’s SSD business and Intel’s NAND flash manufacturing facility in Dalian, China.  In the second phase, scheduled for 2025, SK hynix will acquire the remainder of the business from Intel, including:

This second phase is expected to be completed on or after March 2025, a date which presumably marks the end to any claims that Micron may have over NAND technology it shares with Intel.

SK hynix, in its late-January earnings call, will include both its own and Intel’s NAND flash and SSD revenues.  How is that likely to look?  The chart below shows Objective Analysis’ market share figures for leading NAND flash makers from 2014 through the third quarter of 2021, with Intel and SK hynix NAND revenues combined. 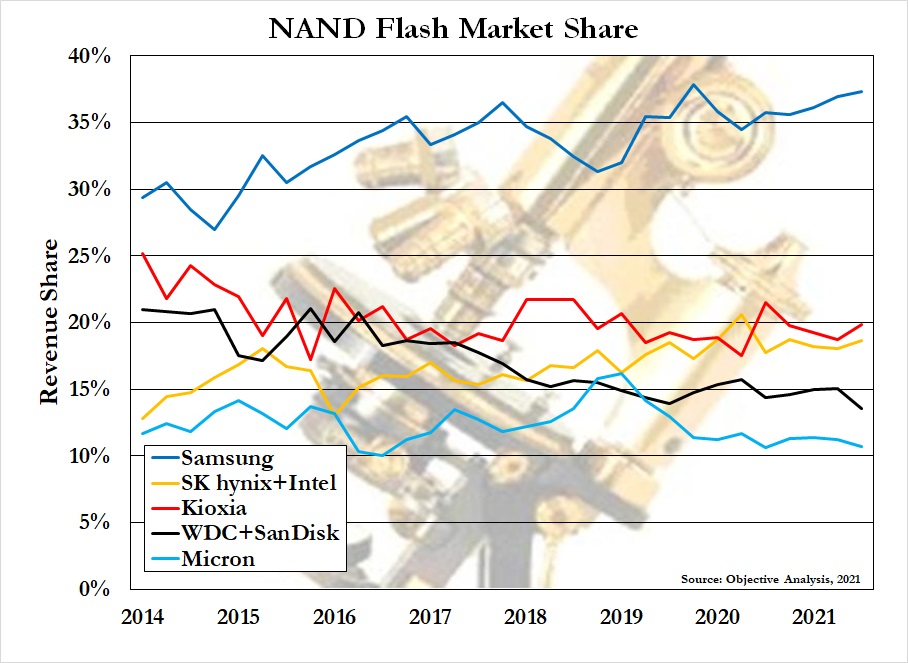 SK hynix (orange line) will be in a close contest with Kioxia (red) for the #2 position in NAND, after Samsung, with its dominant share of more than 35%.

The companies’ product lines should mesh well, since SK hynix has had a strong consumer focus while Intel narrowed its offerings to SSDs for the enterprise.  There’s not much overlap to worry about.  SK hynix has done well in markets that Intel pulled out of early in its foray into flash, namely discrete chips and wafers.  Meanwhile, Intel has built a very solid reputation for reliability and performance, attributes that allow its SSDs to command a higher price.

While the move should benefit SK hynix thanks to its larger production scale, one key factor will stand in the way: Intel’s NAND flash process differs from that of all other flash makers since the company uses a floating gate process, while all of its competitors use a charge trap.  What this means from a business standpoint is that the subsidiary will need to use different chip designs, production facilities, and R&D efforts than the parent company, and this will slow SK hynix’ efforts to optimize costs.

Over time, it is reasonable to expect for Solidigm to migrate to a charge trap, not necessarily for technical reasons, but simply because the combined efforts of the rest of the industry will drive the cost of the process (tools, techniques, etc.) to a lower level than can be reached by a process that is being used by only one supplier.

No matter what, it appears that Solidigm and SK hynix will maintain an arm’s-length arrange for some time, probably until the second phase is complete.  As a standalone subsidiary, Solidigm will probably maintain its own sales and marketing staff, an area that is the first thing to disappear during most acquisitions.  Other organizations are also likely to remain largely intact.

Folks who pay attention to older electronics technology are apt to find the name sounds similar to radio terms that were created about a hundred years ago – words like Amplidyne, Anodyne, Autodyne, Heterodyne, and Homodyne.  The company tells us that this was not the intent.  Solidigm says that the name is meant to convey a: “commitment to create a new paradigm of solid-state storage that … revolutionizes the memory storage industry.”  It seems to be derived from the word “Paradigm” which was a wildly popular term in the pop-management books of the 1990s.

The name “Solidigm” was probably chosen from numerous alternatives because it had not been copyrighted, so it’s reasonable to assume that the URL would not already have been taken, but that’s not the case.  Solidigm has had to kick off by using the URL SolidigmTechnology.com, rather than simply Solidigm.com.  One can only hope that this will be remedied at some future date.