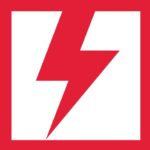 Fadu, a startup out of Korea, made a big  splash at the Flash Memory Summit to announce its new NVMe SSD controllers that don’t compromise speed to achieve low-power operation.

The company’s products are focused on quality of service (QOS) in enterprise-style 24/7 workloads with the aim of enabling the transition to NVMe in Enterprise and Hyperscale data centers, the fastest-growing segments in the SSD market.  Some readers may recall that Fadu won the 2018 FMS Best-of-Show award in the “Most Innovative Flash Memory Technology” category for an earlier generation of products.

The company’s founding team comes from Samsung and Hynix with a CEO (Jihyo Lee) from Bain Capital.  Lee gave a keynote address at the Flash Memory Summit simply titled: “Enterprise SSD: The Future”

The new SSD controller, Annapurna, is a PCIe Gen3 , NVMe 1.3 ASIC.  If the name “Annapurna” sounds familiar it might be because it is the name of the tenth highest mountain in the world in the Himalayas.

Fadu has told The SSD Guy that Annapurna has the distinction of running the lowest power in enterprise for its performance level.  Enterprise SSD run time performance is usually lower than the advertised figures because of heating issues that are typically addressed by throttling the SSD’s performance.  Lee showed one m.2 SSD that was specified at 3.3GB/s read, but that actually dropped nearly 60% to 1.4 GB/s in operation.  Annapurna has been designed to prevent that issue.  Lee’s presentation centered around power-performance as measured in IOPS per Watt, which he showed is currently no better for most NVMe SSDs than it is for SATA designs at about 27K IOPS/W, with the highest-performing NVMe SSDs peaking at 68K IOPS/W.  He asserted that Annapurna provided SSDs with the highest power-performance in the industry at 164K IOPS/W.

The way that they have achieved this is by redesigning its NVMe SSD controller from the ground up, replacing the usual Flash Translation Layer (FTL) and complex CPU subsystem with a streamlined new architecture.  Fadu introduced a new “Flash Acceleration Layer” (FAL) that includes accelerators and schedulers to improve IOPS/W and QoS and teams this hardware with a RISC-V based processor for exception handling.  The  company claims that Annapurna is the first RISC-V SSD controller and uses a core from SiFive.  This approach has allowed the Annapurna to meet the full bandwidth of the PCIe specification even in an m.2 format, while still avoiding the issue of heat.  Lee showed that with the following slide: 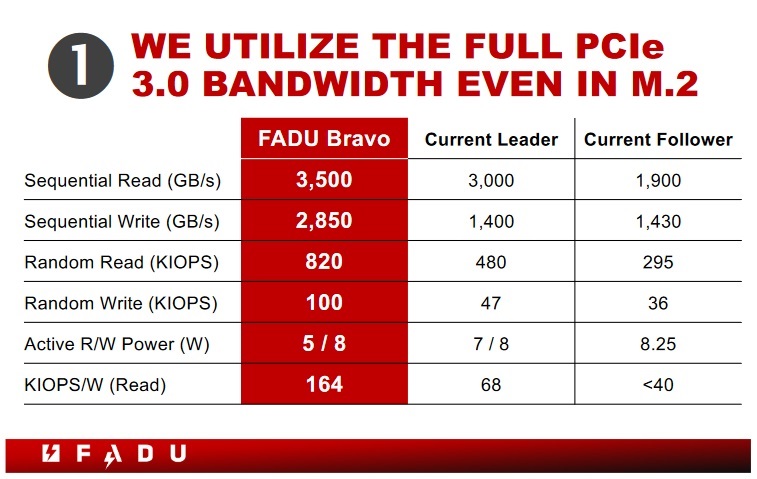 Fadu introduced its first NVMe SSD based on this new architecture (embodied in an FPGA) in 2016, and tells me that at that time it was the highest-performing NVMe SSD.  Annapurna is the ASIC embodiment of that design.

The company has done a lot of diligence to assure that Annapurna will operate successfully with all flash producers’ leading-edge NAND chips.  Fadu claims that a design based on the Hynix v5 3D NAND is the world’s fastest m.2 device.  They have even made a port to Toshiba’s new XL-NAND, the 16-plane chip that Toshiba will use to compete against the Intel Optane SSD and Samsung’s Z-SSD.  This SSD, which is currently sampling, boasts a 19μs latency.

Fadu has also rolled out a line of SSDs, which it calls the Bravo series, based on the Annapurna processor, and was demonstrating them in the company’s booth in the Flash Memory Summit exhibit hall.  The standard Bravo is built using TLC NAND, and the  high-performance Bravo XL U.2 SSD provides extreme performance by harnessing the speed of Toshiba’s XL-NAND flash.

Lee disclosed some details about the company’s upcoming Everest controller (the highest peak) which brings a similar level of performance to the PCIe gen. 4 interface while still managing heat and power without compromising performance.  Power/performance for this controller is expected to exceed 200K IOPS/W.