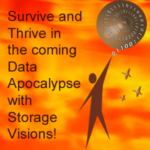 Once again The SSD Guy will be playing a part in the annual Storage Visions conference which has been moved this year to the Santa Clara Hyatt Hotel adjacent to the Santa Clara Convention Center.  It’s now a 2-day conference (October 22-23) and has an agenda packed with interesting subjects, speakers, and panelists.

Storage Visions’ mission is to bring together the vendors, end users, researchers and visionaries that will meet growing demand for digital storage for the “coming data tsunami.”

I will moderate a panel on an exciting new technology that is currently known by a few different names, including “In-Situ Processing,” “Computational Storage,” and “Intelligent SSDs” (iSSD).  It’s a kind of SSD that uses internal processing to reduce the amount of data traffic between the server and storage.  This helps get past an issue that plagues many applications which spend more time and energy moving data back and forth than they do actually processing that data.

The panel, at 8:15 Monday morning, October 22, is named: Circling the Wagons—Memory/storage-centric computing, and is sponsored by Tachyum, a start-up founded by serial entrepreneur Rado Danilak, who previously founded the SSD controller company SandForce and flash array maker Skyera.  The abstract reads:

Persistent memory gives us the capability to access content quicker than ever before and save power.  This gives us the ability to build new computing architectures that resolve around moving processing to compute, rather than data to processors.  This session explores that developments in hardware and software that enable the next generation of local and networked memory/storage centric computing.

Watch for an upcoming report on this topic on the Objective Analysis reports page.

I will be sure to attend the session that immediately follows this one which is being led by Dave Eggleston, who many know for his great contributions covering emerging memories at the Flash Memory Summit.  Dave’s session, called: Good Monsters—Emerging memory technologies battle the data horde is based on this abstract:

Emerging non-volatile solid-state storage technologies are set to replace or supplement DRAM in many applications.  New fabric technologies will enable fast network storage using NVMe devices.   From enterprise to embedded consumer applications the tools for taming the vast data beast are coming into place.  This session will show you how you can put these new technologies to use in your most daunting applications.

The speakers will be:

The show’s organizers have provided my readers with a limited-time $100 discount available by clicking HERE.

I hope to see you there.  Drop me a note if you’d like to meet up at the show.