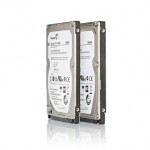 Higher-RPM HDDs help to accelerate disk accesses by a small percentage while a hybrid can boost speeds significantly.  According to Seagate, END_OF_DOCUMENT_TOKEN_TO_BE_REPLACED

Some folks who look at the speed difference between HDDs and SSDs ask themselves why HDD makers don’t defend their market against the SSD menace by cranking the speed beyond 15,000 RPM.  An unfortunately popular answer is that the edge of the HDD would have to break the sound barrier and the HDD would shatter.  Is this true?

With a little back-of-the-envelope calculation The SSD Guy can rapidly disprove this. (Forgive me, but I am going to mix metric and English measure here.)

The speed of sound is END_OF_DOCUMENT_TOKEN_TO_BE_REPLACED