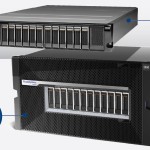 Over 4,000 IBM FlashSystems have shipped since the brand was introduced two years ago causing the company’s bit shipments to outpace the combined shipments of the second and third-ranked flash array providers.

The IBM FlashSystem V9000 comes in a 6U package that incorporates twelve IBM MicroLatency modules that provide 57TB of RAID 5 usable capacity, which then blooms to 285TB with IBM Real-time Compression. The proprietary modules provide more consistent performance than SSD-based systems – the system is as fast when it is 90% full as it is when only 10% of its total capacity is in use.

IBM tells us that the FlashSystem V9000 is not simply a virtualized node built up from a number of IBM FlashSystem 900 systems, but is a single, integrated system purpose-built to address the needs and focus of cloud, analytics, mobile/social and security. It supports seamless concurrent capacity increases up to its 2.2 petabyte upper limit when real-time compression is used.

IBM’s FlashSystem V9000 is currently available and carries a 7-year warranty as well as an optional 5-year “TCO” lease that IBM has priced to be cheaper than the high-performance disk arrays it has been designed to replace.  This is intended to bring peace of mind to skittish would-be flash users.

The SSD Guy has always admired TMS products, and they appear to be getting even better under IBM’s care.  Both systems should provide a pretty important boost to IBM’s competitive positioning.

Samsung recently introduced  its 3D V-NAND-based 850 SSD which, according to The Tech Report, uses the same MEX controller as the company’s 3-bit planar SSD, the 840, introduced last year.

Samsung said in its keynote speech at the 2013 Flash Memory Summit that V-NAND consumes an average of 27% less power and runs at least 20% faster than its planar counterpart in an SSD application, all while providing ten times the endurance.  It’s only natural to assume that this would allow designers to produce a V-NAND SSD that would significantly outperform its planar NAND counterpart.

The SSD Guy had an opportunity to review END_OF_DOCUMENT_TOKEN_TO_BE_REPLACED

SanDisk has just introduced the Ultra II SSD, an upgrade of the company’s original Ultra drive. The new device is being promoted as a 28 times faster HDD replacement that offers faster boot-up, longer battery life, and shock resistance, in an approach that appears to be a throwback to the early days of SSDs where the point was to sell the technology rather than the product.  Although the press release shows sequential read & write bandwidth numbers of 550 and 500MB/s, neither the press release nor the online product literature even mention IOPS or other measures that are now commonly used to compare one SSD against the other.

SanDisk does tout the fact that this SSD uses END_OF_DOCUMENT_TOKEN_TO_BE_REPLACED 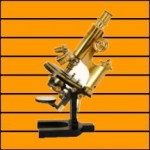