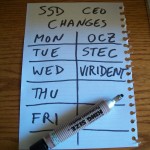 This week has gotten off to an odd start.  On Monday OCZ CEO Ryan Peterson resigned, after having built the company from a supplier of PC cases, power supplies and DRAM for gamers into a leading SSD maker, and then launching a successful IPO.  On Tuesday STEC’s CEO Manouch Moshayedi announced (via an SEC filing) that he will step down “pending resolution of a civil complaint filed against him by the Securities and Exchange Commission.”  Finally today Virident announced the hiring of Mike Gustafson of BlueArc repute to become CEO while former CEO and co-founder Kumar Ganapathy shifts his focus to business strategy, new product development and strategic partnerships.

What will Thursday and Friday bring?

Although that last sentence is meant simply as a joke, the prior three occurred, quite coincidentally, in succession.

The SSD Guy has a lot of admiration for both Peterson and Moshayedi for having built very solid SSD suppliers by pushing forward into a developing new market, and thriving while hundreds of competitors failed to gain traction.  I would guess that there may be some relationship between Peterson’s departure and the September 5 earnings pre-announcement in which OCZ projected a miss based on a lack of NAND availability.  My evil twin, The Memory Guy, watches the NAND market closely, and has been having trouble finding any sign of a NAND shortage of any sort, despite Toshiba’s commitment to slash production and rumors of a similar move by Samsung.

Moshayedi’s difficulties stem from an investigation that an earlier STEC release indicated was no longer an issue.  Note that STEC’s wording in yesterday’s SEC filing leaves open the option that Mr. Moshayedi could come back to lead the firm.

As opposed to the other two, the Virident announcement is refreshingly upbeat, as the company announced the restructuring in the same press release that told of its $26 million D-round of financing.  Virident has always been a company with an excellent product, but one that has not previously focused as much attention on sales and operations.  I would expect for Mr. Gustafson to change that approach, which could lead to successes similar to those experienced by Violin when that company drafted Don Basile as CEO.  Silicon Valley has seen more than its share of failed companies whose technology was superior to that of their competition; Virident’s plan seems to be to avoid that possibility.

2 thoughts on “The Week of CEO Changes”