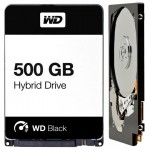 The last point is extremely important.  Intel is really promoting the new Ultrabook form factor, and it is difficult to put a drive that is larger than 7mm into the Ultrabook’s thin profile.  Furthermore, Ultrabook performance specifications require a modicum of solid state storage which most OEMs are providing as a separate SSD in addition to a standard HDD.  A hybrid drive would allow these OEMs to omit the SSD altogether. The SSD Guy was able to hold one of the WD hybrids at the Intel Developer Forum today – it’s impressively small!

Rumors indicate that the WD hybrid has a 16GB cache compared to Seagate’s 8GB cache, but WD hasn’t yet formally announced its cache size.  Since some SSD makers argue that a 16GB MLC SSD meets Ultrabook performance specifications under Intel’s SRT caching software, a 16GB cache would seem to be a reasonable size for a hybrid drive. Objective Analysis is bullish on hybrid HDDs: HDD makers already put DRAM caches into their drives.  Why shouldn’t they convert this cache to a DRAM-plus-NAND rendition?  We have published a report that examines this market in depth and forecasts its impact on the SSD market.  This report: Are Hybrid Drives Finally Coming of Age? that can be purchased for immediate download from the Objective Analysis website.