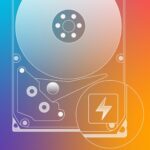 Western Digital today announced a change to the architecture of HDDs that the company showed can increase an HDD’s capacity and performance without changes to the heads, media, or mechanics.   Since the design, called OptiNAND, involves a good bit of NAND flash, The SSD Guy decided that it warranted discussion here.

That, and the fact that the company said that it plans to ship a 50TB HDD using this technology in the second half of this decade, which will once again postpone HDD’s displacement by SSDs, since it will cause HDD prices to remain substantially lower than those of SSDs.

It appears that the company asked its researchers: “What could you do if you added a big gob of NAND flash and a more sophisticated controller to an HDD?”  The answer is that the HDD can be allowed to push off certain capacity-intensive housekeeping functions into the NAND flash.  Metadata can be accessed more quickly and effectively, and a larger amount of metadata can be stored in the NAND than was practical on the HDD.

This speeds up the HDD’s internal housekeeping while allowing the controller to do a better job of it, which means that the track spacing on the HDD gets a little tighter, so it can pack in more data.  10% more data, in fact.  WD has converted its 18TB HDD (which uses Conventional Magnet Recording – CMR, as opposed to Shingled or SMR) into a 20TB CMR product through this approach.  Note that the 20TB is the HDD capacity, and the NAND, which is not visible to the host system, is not included in this figure.  Since you asked, the NAND starts at 64GB, which should add roughly $6 to the cost of the HDD at today’s prices.

By storing metadata on the NAND this new approach mitigates the performance impact of Adjacent Track Interference (ATI) refreshes, so tracks can be more closely spaced.  Here’s how: Today’s standard HDDs write a full track at a time, and refresh data in entire tracks. In OptiNAND, the NAND flash records write operations in sectors instead of whole tracks to eliminate excess refreshes and ATI.  This allows the tracks to be placed closer together without slowing their access.

Specific data that has been moved to NAND includes gigabytes of statistics on spindle runouts and other HDD management metadata, like the data for remapping and restoring shingled tracks.

Management stressed that this was a direction change, and bore no similarity to the 2006 Hybrid HDD, which was simply an implementation of a NAND cache to augment the HDD’s existing DRAM cache.  In fact, they frequently repeated that OptiNAND is not a Hybrid HDD, but something far greater.  The SSD Guy agrees.

They also took pains to explain that the NAND is not in the data path, but it helps reduce the interruptions to the data path that occur in other HDDs as they remap sectors, or manage background activities.  In OptiNAND the NAND flash does this housekeeping in parallel with the HDD’s data accesses.

In the end, though, this is a way to use the computing and memory advances created by Moore’s Law to add 10% more data to an HDD without requiring any mechanical changes.  That means that HDDs will continue to get cheaper, keeping them from getting displaced by SSDs anytime soon.