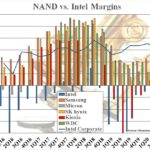 Intel recently sold its NAND flash business, which was mainly producing SSDs, to SK hynix, a Korean competitor.  Some people have asked the SSD Guy why did Intel do this? The company had highly-regarded products that could command top prices.  Since Intel’s NAND flash fab is in Dalian, China, one person even asked if the divestiture could have been in response to the US-China trade war.

A better question is: “Why did Intel get into NAND in the first place?”  NAND flash is a very bad fit for the company since it reduces Intel’s profit margins and, from a business standpoint, it behaves erratically by ricocheting back and forth between losses and profits.  Investors admire Intel for its predictable profitability, and NAND flash simply doesn’t fit that description.

It seems that Intel entered NAND back in 2004 for two reasons:

The interface situation sorted itself out.  As for that NAND wave, Intel temporarily lost its #1 title to Samsung for a couple of quarters in 2018 only to win it back again when the DRAM market collapsed.  With both of those issues behind them, there was no reason for Intel to remain in the NAND business.

The chart below, a larger representation of this post’s first graphic, compares the operating margins of the world’s leading NAND flash makers.  That’s shown in the columns.  The line shows Intel’s corporate operating margin, the combined margin of all of Intel’s businesses combined. 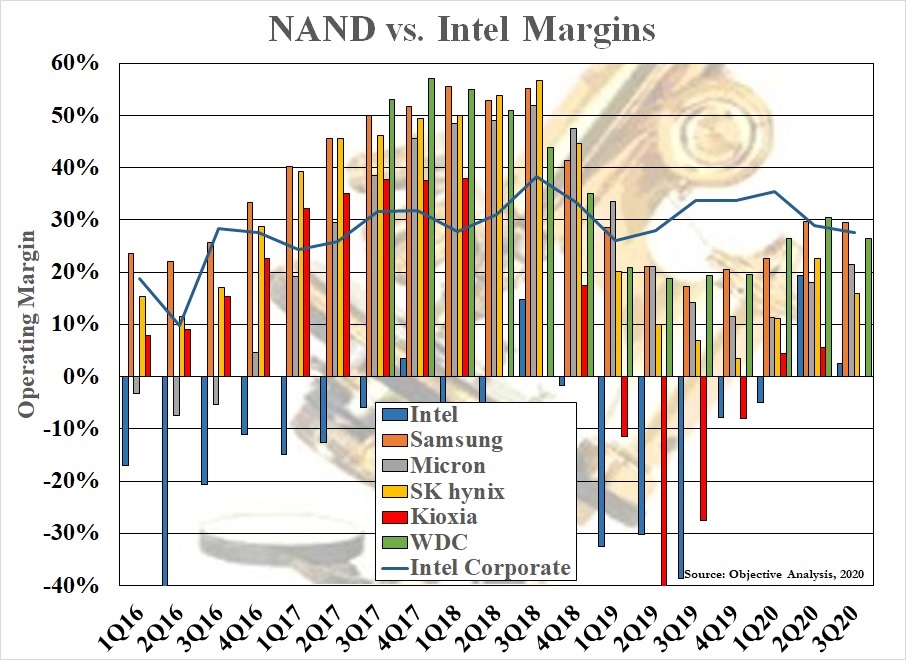 Note how consistent Intel’s corporate margins have been compared to the up and down behavior of the columns.  Yes, in 2017 & 2018 there is a period when many companies’ margins exceeded Intel’s corporate margins, but that was an extremely unusual period of profitability for the NAND flash and DRAM businesses that is unlikely to occur again within the next decade or more.  A reasonable projection for the NAND flash market is that it will behave more like 2019 & 2020, with margins oscillating between 0-30%.

I must disclose that this chart is far from perfect.  The margins of Samsung, SK hynix, and Micron are for their entire business which is both DRAM and NAND flash (including SSDs).  Also, Western Digital’s (WDC) margin is the gross margin for the company’s flash business, which it reports every quarter.  WDC doesn’t reveal its flash business’ operating margin.  Finally, the Intel columns show the operating margin for Intel’s Non-volatile Solutions Group, or NSG, which was producing NAND flash chips, NAND-based SSDs, and Optane SSDs.  The almost-constant losses that NSG sufferred can be attributed to the phenomenal cost of making Optane into a reality.  So there’s a lot of mixed-up data in the chart.

Note that NSG only accounts for 5-8% of Intel’s corporate revenues, so the influence of NSG on corporate margins is small.  Still, it’s a drag on profits, and it’s a business that Intel doesn’t need to participate in.

NAND flash is a good business for Intel to leave to other companies.  And that’s exactly why the company decided to sell that business to SK hynix.

Over time I expect for Intel to sell off its Optane business too, but that will come later for reasons that I won’t go into here.